I don't get it... What is up with the geeky little asian boys in the computer art department who pick a seat right next to you, and shamelessly stare at what you're working on. It happened to Eric, and now it's happening to me. It's the weirdest feeling to have some stranger sitting next to you, sneaking in multiple glances at your monitor, thinking that you can't see them....Perhaps they haven't heard of peripheral vision. The asian kid next to me was annoying as hell... He was listening to weird, obnoxious music, talking to his friend (who was just as annoying) about his favorite concept art, and kept tapping his fingers on the keyboard loudly, NONSTOP.
..... I was about to punch his face in. Thankfully, he left just as I was reaching my boiling point.

In order to release all this pent up anger, I leave you with this picture, overflowing with profundity. 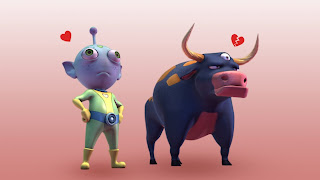 Not much to say...... just a little scared of how school finished so quickly. I haven't had much time to draw or paint anything cus of thesis, but now that I've gotten over the biggest hump of the year, I'll start to post more stuff.

Here's some random WWII spy chick....too lazy to color it...bah.
Btw, she's holding a (badly drawn) mauser c-96. The most uber awesome-ist german pistol of all time. I used it all the time in RE4, heheh.... 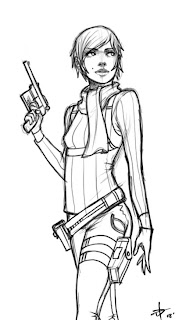 I will post my thesis here soon. The visuals are all done, I just need to get the sound finished.
Posted by David Han at 5:31 PM 4 comments:
Newer Posts Older Posts Home
Subscribe to: Posts (Atom)