My body is always tired, but my mind just wants to bust out the story and comic for Revenant. Ah yea, and to add on top of the fact that there's a dumb vampire craze going on, I just found out that there's a movie coming out called, you guessed it, The Revenant. I think I went nuts after I found that out... The story isn't the slightest bit similar, in fact its title probably serves the movie better than mine, but still! Now I'm considering changing the title for my story. Crap.

Anywho, here is a rather lazy cg I made of Regina using one of my old sketches. I really want to make this a movie someday... hence, the cheesy film grain and depth of field. 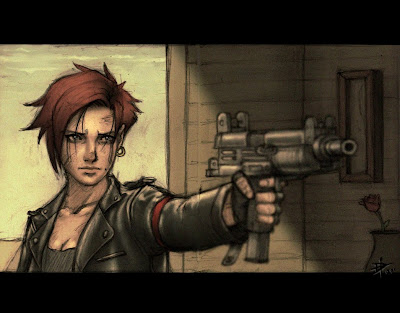 I've been writing the script for Revenant (now tentative title) on my commutes to and from work every day. It's a slow and grueling process that takes massive amounts of tweaking, chin scratching, and actually acting out the scenes myself (mentally of course). It takes an asston of time to get the dialogue right, and even more to make sure that each character is, well, staying in character. It's slow. But if this is what it takes to get it right, I'll drag my fat ass through it. It will get done. Comic, movie, 3d short, WHATEVER. Something will come of this.

p.s - Uncharted 2 is one of my favorite games ever.
Posted by David Han at 12:17 AM 2 comments:
Newer Posts Older Posts Home
Subscribe to: Posts (Atom)