Just keeping busy. I still have a lot to learn about lighting cus I felt like a retard shading some of these guys. Hoo-ah! 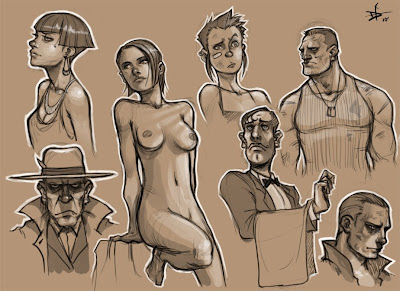 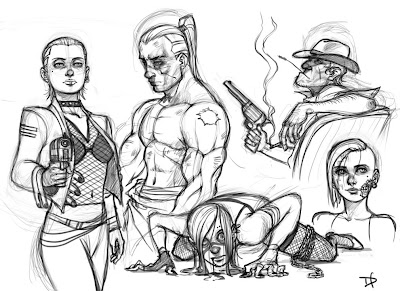 I've been watching Blade Runner a lot recently, so these doodles are pretty Blade Runner-esque (except for that old cowboy and the samurai dude, heh)

I recently watched it again, and I understood and liked it. I think Blade Runner is a movie you just have to watch a bunch of times before you can really appreciate it. Took a long freaking time, but I can say I like the movie now, and not just because of its aesthetics. Speaking of aesthetics, holy crap. I mean this isn't news or anything but, jeez! The designs for all the props, wardrobes, vehicles and environments never fail to leave my jaw hanging. The movie's art and effects still hold up pretty damn well to this day, and I think that's proof of just how ahead of its time it was. ... I could go on and on, but this is stuff everybody already knows. Just gettin' it out there that I really like Blade Runner.

I'm pretty much in love with anything 80's sci-fi... I think it first spawned long ago when I played a game that had a lot of synth beats and electronica music in it. It really caught my attention and I loved the sound of it. From then on, whenever I heard any music that was synth heavy, I got pretty excited. As my taste in movies matured, I started watching old movies to see what I've been missing. A lot of old sci-fi movies had synth scores, and thus I became hooked. The mesmerizing sound of synth music mixed with childhood memories of watching hilariously gory, sci-fi movies like Total Recall, Terminator, Running Man (heh) or Robocop on tv really just created in me, a love for this stuff. 80's sci fi. Fuck. Yes.

I may be wrong, but I think as far as great synth scores go, Blade Runner is the ultimate example. Check it out!

This is one of the reasons why I love the game, Mass Effect, so damn much. It has synth heavy music! Plus, the art style borrows a lot of elements from Syd Mead's designs for many sci-fi movies, Blade Runner included. What's not to love?

I've been meaning to write about this stuff for a while. A lot of passion went into this post, but it came out all jumbled. Ah well. Blade Runner! 80's sci-fi! Synthesizers! Time to conk out.
Posted by David Han at 2:22 AM No comments:
Newer Posts Older Posts Home
Subscribe to: Posts (Atom)