Went to a birthday party on Saturday for my friend Henry, and he had planned for us to make some huge bubbles outdoors... Super fun stuff! Homemade solution and some sticks with shoe laces attached is all we needed :) My buddy Jeff brought his saucesome camera and recorded some hd footage of it. Check it out!

Dunno who that guy making the bubble at the end of the video is, but man is he fugly. Peace! 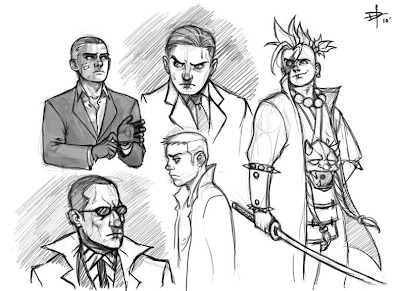 Here are some Regina expressions I sketched out! I think I might stick with this new hair, since it was so damn hard to draw her old hair over and over. Lemme know what y'all think of it. I'm preparing to animate her in 2d... Hopefully it turns out alright! 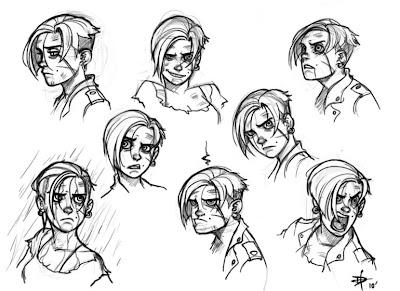 On a side note, I've been watching 3:10 to Yuma over and over recently... Extremely well acted, crafted, and packs an emotional punch. Man I love that movie.
Posted by David Han at 10:16 PM 1 comment:

I've been meaning to do some 2d animation lately and now that I've got some time, I tried it out! Here's some random dude swinging a baseball bat.

It's super short and semi-lame, but still pretty good for someone who isn't an actual 2d animator I think. I did some pose to pose, as well as some straight ahead and came out with some interesting results...

It's pretty awesome that I can use my sense of timing and spacing, more or less, the same way in 2d as I do in 3d. It just reinforces the fact that 2d and 3d animation are very much the same... but sorta not. The concepts and ideas of animation transfer over perfectly, but hell.... drawing every single frame is so much harder than just rotating a control for an arm or a leg. Some people say that it's harder for 2d animators to move into 3d, because they have to start accounting for three dimensional space. Sure, I agree that that can be a little difficult at first. But really, at the end of the day, you're just manipulating a controller. If a 3d animator moves into 2d, manipulating a controller all of a sudden turns into trying to visualize an arm or a leg at a difficult angle, and then trying to draw it so that it's convincing to the viewer. Oh yea, and you also get no interpolation between keyframes. Gotta start from scratch! 2d is pretty hardcore. I already have a lot of respect for 2d animators out there, but even more after trying out this exercise.

I think I'm gonna try animating characters with faces next. Should be fun!
Posted by David Han at 10:27 AM 3 comments:
Newer Posts Older Posts Home
Subscribe to: Posts (Atom)